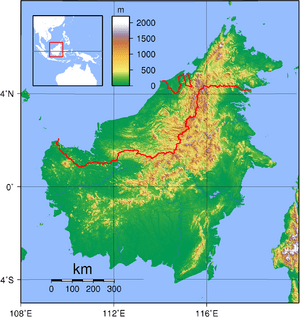 Learn About Borneo: Borneo is the third largest island in the world. It is in the center of maritime southeast Asia. This island is part of three different countries. Indonesia, Malaysia and Brunei each have part of Borneo. Indonesia’s region is called “Kalimantan” (although Indonesians use this word for the whole island). Malaysia’s region of Borneo is called East Malaysia or Malaysian Borneo. The independent nation of Brunei is a small part of the island. Borneo has a rainforest that is in danger because it is valuable. Lumber companies cut trees here illegally.

Borneo is surrounded by the South China Sea to the north and northwest, the Sulu Sea to the northeast, the Celebes Sea and the Makassar Strait to the east, and the Java Sea and Karimata Strait to the south. It has an area of 743,330 km² (287,000 square miles). Borneo is home to a few of the oldest rainforests in the world.

Borneo is home to a vast array of wildlife, including the endangered orangutan, as well as other animals such as monkeys, elephants, snakes, parrots, clouded leopards, hornbills, tarsiers and deer.